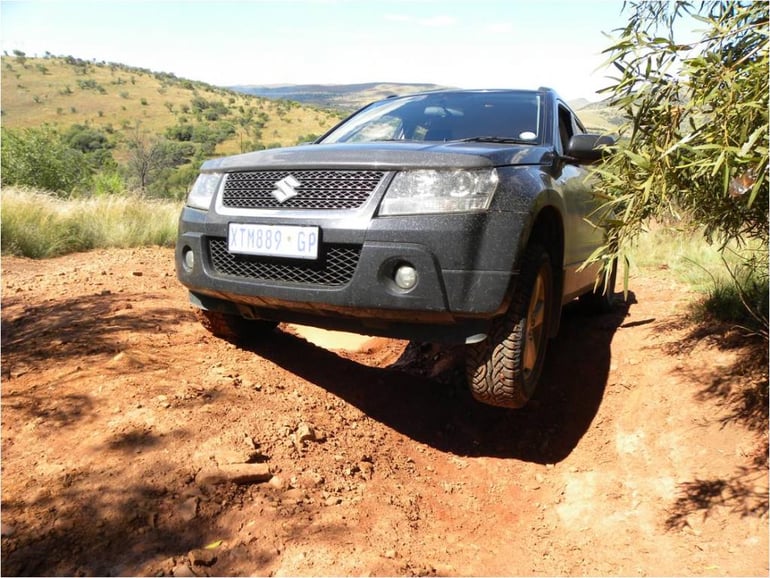 Suzuki 4x4 Club GP recently had a great day out at the Hennops 4x4 trail and have shared their adventures with us.  Take some time to look at the pictures to see what your Suzuki can do!

Hennops is one of the oldest 4x4 trails in Gauteng and still one of the best. It is situated just east of Hartebeespoort dam and offers a variety of obstacles from mild to wild.

The turnout at the recent event was excellent. There were about 26 vehicles, five Vitaras, three Fortuners, two Landrovers, one Mazda and a gaggle of Jimnys. There were many new faces to welcome as well as some old friendships to renew.

The day started with the Jimny Flex competition to determine which of the aftermarket suspension kits has the best travel before splitting into two groups to tackle the obstacles.

The first part of the trail was in a rocky and hilly area. Initially there were not any really difficult obstacles and everybody negotiated them fairly easily. However, there was then the one that proved to be a tough nut to crack. A sign at the entrance to the obstacle cautioned drivers to walk the obstacle first and then decide whether to tackle it or not.

Taking this advice, many frowns and shaking of heads were observed. There was a particularly nasty rock near the top of the obstacle with a high almost vertical step. The decision was made to stack some rocks at the foot of the step to make it a bit easier.

Remember a photo does not give the same perspective as the naked eye. This obstacle is much more demanding than what it looks on the photo - it is probably a grade 3.5 touching on 4.

Once a driver is in the obstacle they are committed, there is no turning back - you make it out on your own steam or are towed out!

Chilli-Pip was the first to brave the challenge and was successful after a few attempts. Others, encouraged by Chilli-Pip's feat, followed.

The trail then headed down into the valley where the dongas awaited. Some were easy and everybody breezed through them while others had people shaking their heads and saying "NO!"

There was one obstacle that was a border case. It was looked at it from every angle and Eventually Kaptein decided to give it a go. Everyone gathered to have a look and alas, he got stuck! Kaptein then suffered the indignity of being towed out.

After this everyone was nervous and hesitant but a Grand Vitara was up next - and made it after the second attempt. That was like a red flag to the Jimny gang. No ways a GV could show them up! A few more drivers tackled it and all made it through eventually.

After an exciting (and sometimes scary) day everyone gathered together for a braai and to share stories. An enjoyable end to yet another fun filled Suzuki 4x4 GP event living the Suzuki Way of Life.

Want to see more articles from us? Get everything Suzuki in your inbox. Subscribe to our blog today.