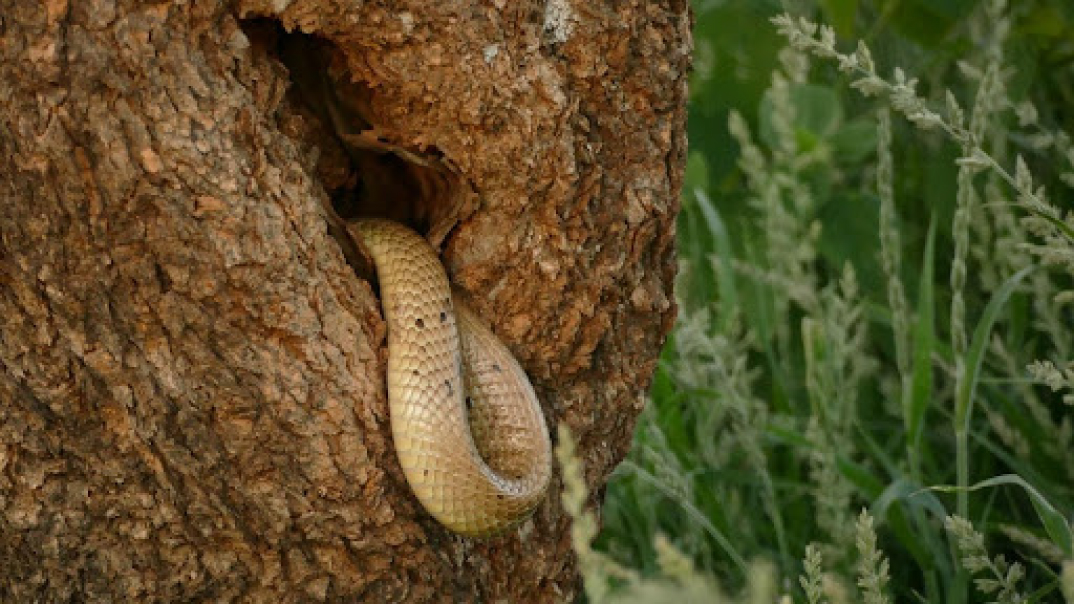 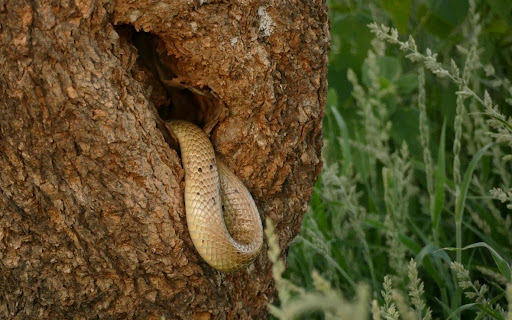 Hot and dry areas in southern Africa, like the Kalahari, are predicted to get even hotter and drier with climate change. That will pose a massive challenge for an ecosystem with organisms already living on the extreme edge of what is survivable. Without enough water, plants are likely to die, and without plants at the base of the food chain, the whole system will struggle to survive. Yet, if both plants and animals can find small areas in their environment that gather moisture and provide shelter from harsh radiation, there is hope that they may be able to cope, even when the large-scale climate is not in their favour. (Photo: A Cape cobra on its way to using a tree cavity to escape the afternoon heat, G. Warner).

With vehicle support from Suzuki Auto South Africa, and fieldwork support from The Rufford Foundation, Grace Warner, a Masters student from the University of the Witwatersrand, is spending one year in the Kalahari to try figure out exactly what small areas are available for animals to shelter in, what physical features they are associated with and how much shelter they actually provide.

These “small areas”, which are known as microclimates, may experience a different climate to the surrounding area. In the Kalahari environment, microclimates are created by structures like burrows, bird nests, rock crevices, cavities in trees or even the shade provided by plants. 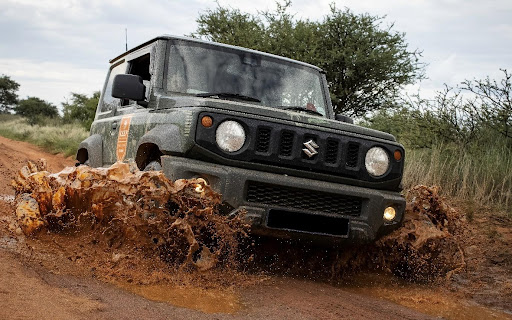 To figure out the density of available microclimates and what areas are most likely to have them, Grace uses the research team’s trusty Suzuki Jimny to journey to the far reaches of Tswalu Kalahari Reserve, where she walks long distances in the dunes, mountains and plains areas, making observations of microclimates. Large mud pools resulting from recent heavy rains in the Kalahari are easily traversed in the team’s Jimny (Photo: D. Rice).

Grace has a set of about 80 thermal data loggers hidden around the reserve in various microclimates. These loggers take temperature recordings every half hour and allow her to compare microclimatic temperatures to exposed “large-scale” temperatures over time. Unfortunately, Kalahari critters like baboons and porcupines seem to have a taste for the tech and seek out the thermal data loggers - opening them, chewing them, and occasionally (thankfully) spitting them out close to their original site. Grace has managed to deter the critters by using some veterinary-savvy tactics and applying an edible bitter solution, often placed on pets’ bandages, onto her loggers. Although the solution hasn’t deterred the most determined of baboons, it has thankfully left the majority with a new-found distaste for metallic equipment, and only occasionally left Grace with a bitter taste in her mouth. 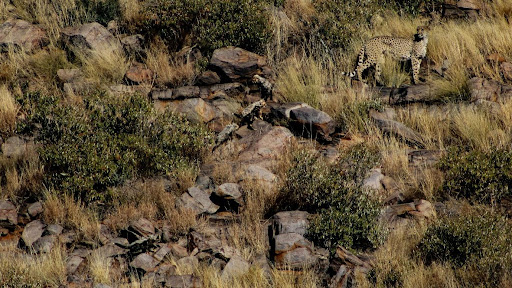 A cheetah mother escorts her cubs back to their den on the mountainside. Rock crevices provide prime thermal real-estate for dens - sheltering young animals from both extreme temperatures and predators (Photo: G Warner).

Some microclimates in the Kalahari have already been studied in terms of their buffering properties, like the impressive sociable weaver nests and aardvark burrows. Sociable weaver nests have been shown to be much cooler in the nesting chambers than outside the nests, providing ideal nesting and resting temperatures for many Kalahari bird and reptile species. Similarly, aardvark burrows have been shown to provide a more thermally stable and humid microclimate for nearly thirty different animals that use the burrows after the aardvarks have abandoned them. 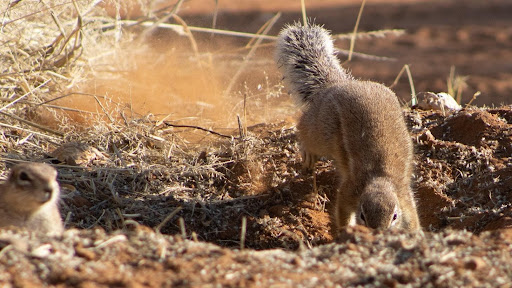 A Cape ground squirrel digging its burrow in the dry winter sand. Ground squirrel burrows provide another remarkably buffered microclimate for many rodents and reptiles, allowing them to survive the icy nights of winter and the scorching Kalahari summer days (Photo: G Warner).

Under the banner of the Kalahari Endangered Ecosystem Project, Grace is attempting to gain more insights into a wider variety of microclimates. By understanding which microclimates are most capable of buffering temperatures over time, we can predict which microclimates will be most important for species to use in sheltering from climate change. Even better, if we can recognize which areas those “best” microclimates are most likely to be in, we can earmark those areas for increased conservation protection, increasing the chances that Kalahari species will have a place to hide when the climate is no longer kind. 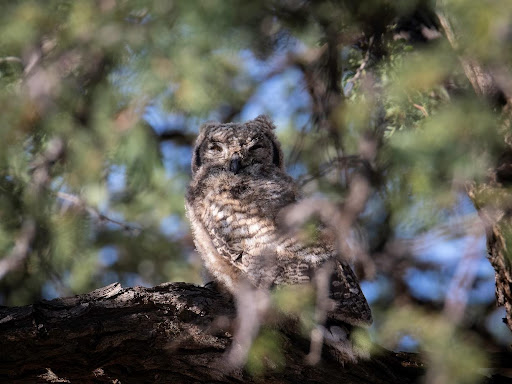 Even simple shade from vegetation can protect animals from the intense Kalahari sun – like this juvenile spotted eagle owl enjoying the dappled shade under the canopy of a tree (Photo: G Warner).

Did you love reading this article? Subscribe to our blogs to continue more articles like this one.