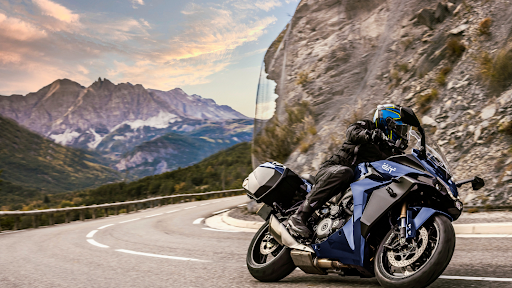 There are many misconceptions regarding what creates grip on bike tyres. This video addresses these misconceptions and dives into the truth about how tyre grip actually works. Welcome to Let's Talk Automotive, and our second instalment on How Tyre Grip works. Now, last week we spoke about car tyres and today we'll look at how motorbike tyres get their grip. And I think this will blow your mind. Now, first off, there are some, shall we say, incorrect statements out there about what creates grip on a back tyre, which I'm going to address now. So two popular misconceptions are that the surface area of the contact patch has no effect on grip and that the more weight we apply, the greater the grip we get. Both these statements are based on Amonton's first and second law of friction. And of course, entirely correct if we are talking about friction, but as we discussed last week, there is a difference between friction and traction. And this means Amonton's laws are only partially applicable and that there are other significant factors that influence our bike tyres grip.

So let's kick off by highlighting that the grip generated by rubber is simply not the same as simple friction, because rubber generates friction in three basic ways. Firstly, with adhesion, which is when there is a molecular interaction between the rubber and the tarmac surface. And that is why the greater the surface area, the more adhesion, in other words, grip is available. Now on a molecular scale, both the surface of the tyre and the surface of the tarmac are extremely rough. And it's the interlocking of these rough patches that creates grip, which increases as we add more load. And we can demonstrate that with these two business cards, which I’ve corrugated. So here you can see, this is the rough surface of the tyre, and this is the rough surface of the tarmac and these two interlocks, which creates that mechanical grip. And we can also see that as we add more load, more interlocking takes place.

Although, there is a diminishing return for this added load, as eventually these rough patches bottom out, which stops any further increase in traction. So there's our diminishing returns in terms of the load that we add to our tyres. And secondly, we have deformation, which is also called mechanical keying. Now this occurs when lateral and vertical loads deform the tyre, and cause sharp edges in the tarmac to penetrate into the tyre, which then cause the rubber and tarmac to key together, which generates more grip. And the third way a tyre develops grip is, believe it or not, through wear. When loads are applied to the tyre, the resulting forces cause the rubber to tear. And we've all seen the marbles that result from this tearing on the side of the track. Now tearing absorbs energy, which means that the absorbed energy is no longer being applied to the tyre, which frees it up to provide more grip.

Now, so far we've concentrated on the compound of the tyre, but what makes a bike tyre different to a car tyre is its shape and how it deforms, due to lean angle. And at this point I want to revisit a claim made, that the size of the contact area has no influence on tyre grip, which would mean the size of our tyres make no difference. Now while this is clearly not the case, what is interesting is that the contact area produced is more or less the same for both narrow and wider bike tyres. So how is it that wider tyres produce more grip? Well, the secret lies in the shape of the contact patch, which changes according to the loads of the tyre and the lean angle that we apply. So the greater the lean angle, the larger the contact area becomes, and this is aided by the patch flattening and deforming under load.

Amazingly in order for a bike to turn, there is a serious amount of slip angle that is created. And this is due to the difference in the bend radius between the tyre, and where we try to turn, and the cone radius of the tyre that is created by the lean angle of the tyre. At different lean angles, the tyre wants to turn at a tighter radius relative to the radius of the turn or the bend. And this is referred to as camber thrust. And it means the tyre is literally sliding through a turn and the greater the lean angle, the more the tyre slides. So 45 degrees, for example, the lean angle of a bike tyre, will experience about six degrees of slip to maintain a balanced turn and lean angle. Which is why when you see the super slow mo's of motor GP bikes, it looks like they are drifting through the corner, but actually it's the tyre experiencing that six degrees of slip angle.

There is so much more to how a bike tyre generates grip, and I've really, really only scratched the surface here. And as with car tyres, we have different tread patterns to cater for different operating conditions each with their own unique ways of generating grip. But I hope that you get the idea of how bike tyres generate grip and how it's different compared to car tyres. I know I'm certainly amazed at how complex bike tyre grip is, and I'm sure you are too.

And so that's it for today's episode on How Things Work and we look forward to catching up with you on next week's episode of Let's Talk Automotive.