Centurion is Suzuki’s Dealer of the Year 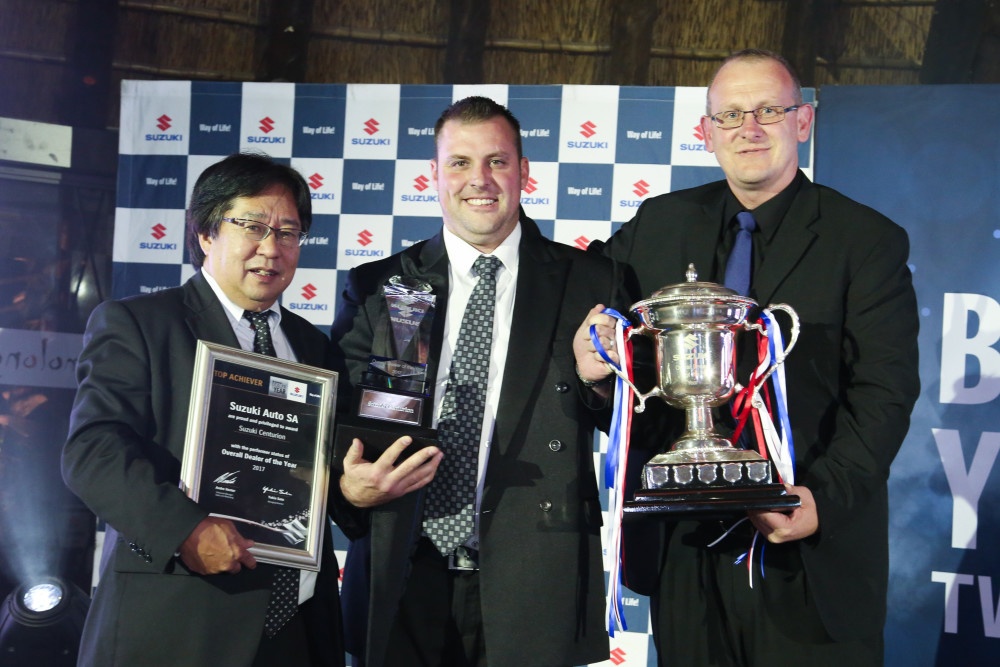 Suzuki Centurion was crowned the top Suzuki dealer in South Africa at the 2017/2018 Suzuki Dealer of the Year Awards.

“In 2017, we singled out Suzuki Centurion as the ‘Dealer to Watch’ during our annual awards, and they did not disappoint,” says André Venter, divisional manager of sales and marketing at Suzuki. “They performed consistently well in almost all the categories, amidst very tough competition and are a worthy recipient of the DOTY title.”

Suzuki Centurion was called to the podium several times during the gala evening, which Suzuki held at the Birchwood Hotel in Gauteng.

The Centurion-based dealer won the Overall Best Practice awards for both service and parts, and it received a Suzuki Platinum Award before taking the overall title.

Suzuki Paarl won the title for the Overall Best Practice for Sales and was identified as this year’s ‘Dealer to Watch’. Suzuki Fourways won the award as the most improved dealer, and Suzuki Bramley and Suzuki Umhlanga won the Awards for the dealers with the best Service Satisfaction Index (SSI) and best Customer Satisfaction Index (CSI) respectively.

Before calling Suzuki Centurion to the stage for the overall prize as the best Suzuki dealer in the past year, it identified the top performing dealers with its Platinum Awards. This year, the Suzuki dealers in Bramley, last year’s overall winner, Centurion, West Rand, Rustenburg, JHB South, Montana, Klerksdorp and Menlyn received Platinum Awards.

“Recipients of the Platinum Award have to consistently offer the highest levels of sales and after-sales service. It is heartening to see that eight dealers in the network managed to qualify for this Award in the past year,” says Venter.

“At this year’s Awards, we welcomed several new Suzuki dealers to the fold and announced a further expansion of dealers for the rest of the year. Many of these dealers will establish themselves in smaller towns and outlying regions, which will strengthen our national network and ensure that Suzuki owners will be able to buy and service their Suzuki’s, no matter where they are,” says Venter.

Don’t miss out on our latest driving tips and safety advice. Subscribe to the Suzuki blog, and you’ll receive our latest content straight to your inbox.