Suzuki Bramley is the top performing dealer in 2018/19 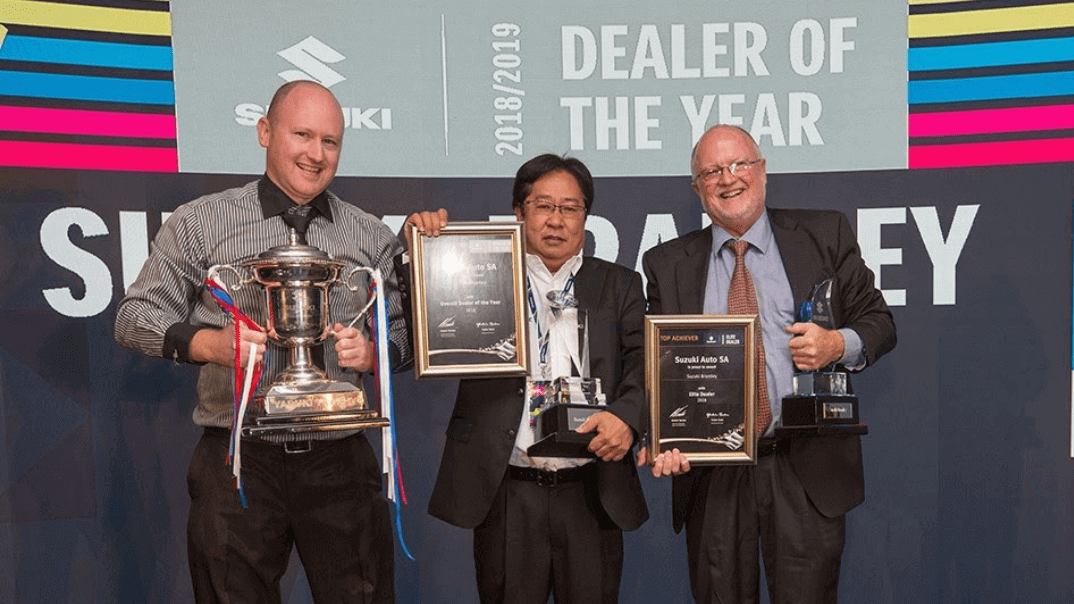 The coveted 2018/19 Suzuki Dealer of the Year trophy belongs to Suzuki Bramley.

It is the large dealership in Kew, Johannesburg’s second win in three years and fifth win since the Japanese brand entered the South African market in 2008, making it the best-performing dealer.

“Suzuki Bramley was our inaugural Dealer of the Year-winner, and it has since maintained its high standards and kept its customers happy. We are very proud of what this dealership has achieved, and we have awarded its consistency with our first-ever Elite Dealer Award,” says Andr? Venter, divisional manager for sales and marketing at Suzuki South Africa.

Aside from winning the Elite Dealer Award and the overall Dealer of the Year Award, Suzuki Bramley also won the Top Sales Volume Dealer Award for large dealers and the Overall Best Practice Award for the second quarter and for Suzuki’s full financial year.

“This year, we awarded dealers from as far afield as Eswatini, Piet Retief and Middelburg. It not only means that our entire dealer network has maintained very high standards, but it also shows how our growing network has now started to reach smaller towns and rural areas,” says Venter.

Further north, Suzuki Middelburg was identified as the Dealer to Watch, while Suzuki Queenstown was nominated as the most improved dealer in the Suzuki network.

IPOP and the PENTA Motor Group (the latter also co-sponsors the AutoTrader Car of the Year competition), were both recognised as dealer groups that sold more than 1 000 vehicles in the period. Suzuki Piet Retief won the new category for the dealer with the best market share in its region, and IPOP was recognised as the dealer group with the highest sales volume.

For the final awards, Suzuki awarded its best dealers in the rural, small, medium and large categories, before picking the overall top dealer. Suzuki Bramley is the Top Large Dealer; West Rand – the winner of the Mobility Finance Support prize – won the award for the best Medium Dealer, and Klerksdorp was the winner of the small category. Suzuki Queenstown won the new category for the best rural dealer.

The Suzuki Dealer Awards were held on the last day of the Suzuki Dealer Conference, during which Suzuki discussed its rapid sales growth and new position as a top 10 vehicle brand in South Africa. The company also unveiled some of the upcoming new vehicles to dealers, such as the Suzuki Swift Sport with its new 1.4 Boosterjet engine and sport suspension, which will be launched in South Africa soon.

“We are truly heartened by the level of support that we receive from our dealer network,” says Venter. “Thanks to their hard work and dedication and with our range of current and upcoming products, I am sure that we can make 2019 another very successful year for the brand.”

Most and least hijacked cars in South Africa [updated]

The car basics - that no one ever told you

Most and least hijacked cars in South Africa [updated]

The car basics - that no one ever told you