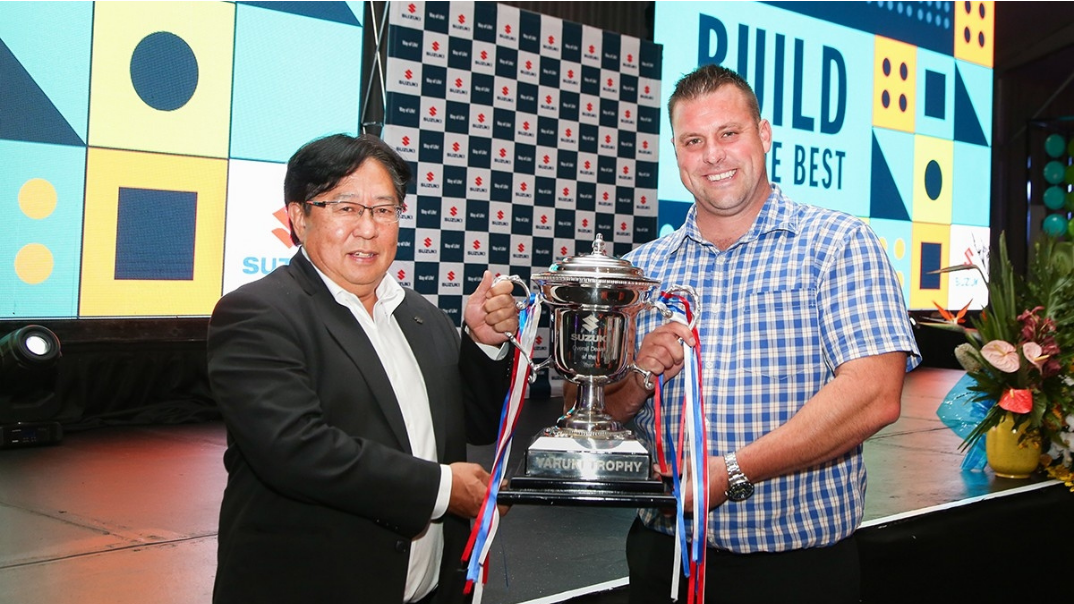 Suzuki Centurion won the Dealer of the Year Award after receiving no less than 10 awards throughout the day, when Suzuki handed out regional and quarterly awards, and in the evening, when the best performing dealers were singled out.

“The past year has been tough, yet our dealer network has broken its own sales records almost as many times as the group has,” says André Venter, divisional manager for sales and marketing at Suzuki Auto South Africa.

In support of Venter’s statement is the fact that Suzuki handed performance awards to nearly half of its dealers to recognize and reward their exemplary performance.

“The baseline measurement that we used to identify the best performing dealers is significantly higher than the winning percentage of our Dealer of the Year Award from our first competition just over a decade ago. “This is very impressive if one considers that Suzuki has doubled in size several times since then and has moved from a small brand to one of South Africa’s best-selling brands.

“Despite this immense pressure on our sales and service support network, our dealers have never wavered, but rather increased the quality of their service to where Suzuki is now one of the two most-awarded brands in the Cars.co.za Consumer Awards for its customer service,” says Venter.

Before winning the overall prize as Suzuki’s best dealer for 2019/20, Suzuki Centurion received an Elite Dealer Award, the Award for the best Service Practice, the Best Parts Practice Award for every quarter in the period under review and the awards for the best Service Satisfaction Index and best Customer Satisfaction Index. Centurion also won the certificate and trophy for the top Large Category Dealer in the group.

As before. Suzuki singled out several dealers for performing at a very high average score across all categories, including the best results for Suzuki Mobility Finance, good service quality, great sales support and freely available service and repair parts.

Coming in at a close second are the Platinum Dealers. They include Suzuki Bryanston, Bassonia, West Rand, Klerksdorp, Alberton, Vredenburg, Polokwane, Boksburg, and Hatfield.

“We were blown away by the level of service at all our dealers,” says Venter. “Even more impressive is the fact that 16 dealers were recognised in the Elite and Platinum categories, despite more stringent criteria, which means that they had near perfect scores from their customers.”

Other significant awards handed out during the Dealer Conference include the Dealer to Watch – Suzuki Zululand – the Most Improved Dealer – Suzuki Bryanston – and the Dealer Group with the Most Sales – IPOP SA. Suzuki Bramley was recognised as the Top Selling individual dealer and Suzuki Piet Retief had the best market share in its area.

Lastly, Suzuki recognised individuals for their contribution to their dealers and the brand’s success. Colin McClaren from Suzuki Alberton was the Technician of the Year, Moosa Toffar of Suzuki Tableview was the Service Manager of the Year, Odette Allers of Suzuki Queenstown the Best Parts Manager, and Danie Labuschagne of Suzuki Menlyn was the best Sales Manager.

“We look back at our first 12 years in South Africa with great fondness and are especially thankful for our supportive, hard-working, and customer-focused dealers. We look forward to welcoming even more dealers into the fold in the year to come and to give each customer the level of sales and service support that Suzuki has become known for,” says Venter.