[UPDATE] The 7 things that make your car cost a fortune in t...

The lowdown on sussing out car specials

The highlights of Limpopo and a first-hand experience in the...

THE BASS LAKE ENDEAVOUR: SUZUKI TAKES JOURNOS ON THE RIDE OF THEIR LIVES 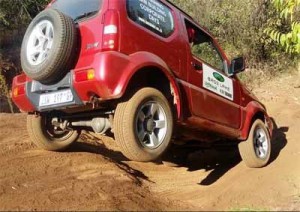 Suzuki recently had the pleasure of hosting a group of intrepid journalists at Bass Lake for a Suzuki 4x4 experience, which left them absolutely exhilarated.

With a professional 4x4 course co-ordinator, a fantastic and challenging off-road track, and numerous opportunities to be impressed by the Jimny and Grand Vitara's incredible off-road capabilities, this is truly an experience that will stay in the adventurers' minds for years to come.

You can read all about it in the write-up below, that was published in Wheels24 on the 25th May.

He's a scuba-diving instructor with 35 years' experience and a busy certification school running at the spring-fed lake who began his off-road training because "Vaalies don't like the cold!"

Well, we don't blame them. With an air temperature of -10 and water of 12 degrees in winter, not many of us would choose to take to the water. So began the 4x4 training school where Pepper has used his legendary skills to teach off-roading 101... And 2, and 3.

Pepper says he focuses on family-orientated training but we were a group of journos with skill levels ranging from zero to (some claimed!) hero who got together to see how it's done. Sponsored by Suzuki SA, it was an entertaining, adrenalin-pumping day during which the jangling of nerves was almost audible in and out of the Jimny.

First, back to school with a theory lesson and some tips on how NOT to do it. Then, when you're wearing the dunce's cap because you screwed up, how to save your car and what's left of your dignity.

Our takeaway message before heading out: 'It's OK to have two wheels off the ground at any given time. Just never on the same side of the car..." Learning, too, that "if you can't go up an incline, don't attempt to come down it" is good theoretical advice until you've tried to go up, stalled, and there is only one way to go. Down...

The Jimny, however, is proof that dynamite comes in small packages, the little 1.3-litre, Pepper says, "often puts larger, more sophisticated, 4x4's to shame". Which was met with a degree of scepticism - until we took to the hills, dongas and water.

In 1968 Suzuki introduced the concept of a rugged and light 4x4 that could go anywhere and do almost anything. And it's been doing that for more than 40 years. The Jimny is very driver-friendly, compact but surprisingly high-performance. In fact a Jimny, once in low range (yes, it has low range!) will tackle just about anything.

In no time we were Chuck Norris-ing up severe inclines, down even steeper ones, and learning (often by error) that reading the ground like a good golfer can get you well... wherever you want to go.

So, after a day of dust, dirt, nerves and a wonderful sense of accomplishment, the unanimous decision was this cheerful little fellow got not one but two thumbs-up for guts, handling, attitude and the fun-factor.

We,re not surprised that there are hundreds of high-spirited Jimny owners across South Africa. Why wouldn't there be when you can spend your weekends doing Jimnastics across the country?

Suzuki put it in a nutshell by saying the Jimny has 4x4xFun in its DNA... 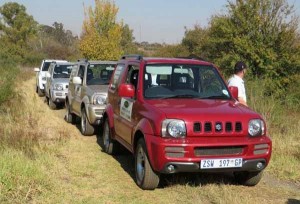 THE JIMNASTICS TEAM: Each was an expert at off-roading, helped by a willing 1.3 engine, all-wheel drive and a short wheelbase.

Some more pics from the day: 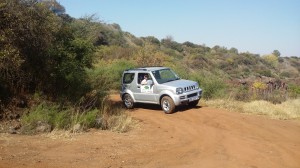 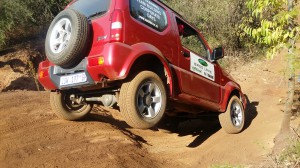 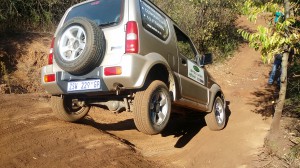 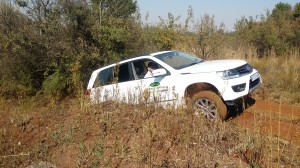 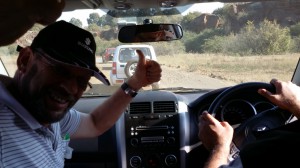 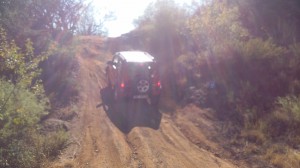