What to do during a roadblock 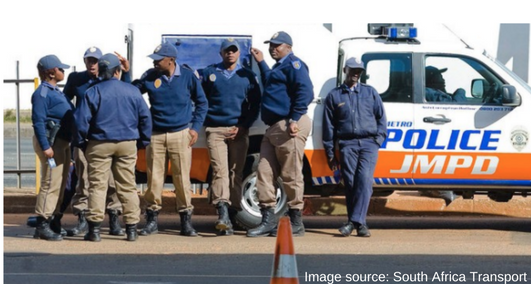 Being pulled over can be quite intimidating, but it doesn’t have to be that way. Know your rights and responsibilities as South African motorist, and stay safe this holiday season.

Roadblocks are an inevitable part of being a motorist. However, many South African motorists are fearful of being pulled over - even though they haven’t broken the law. Knowing your rights and responsibilities during a roadblock or routine check, can help you to stay calm and act appropriately.

Things to remember during a roadblock

An officer in uniform has the right to stop any vehicle

Demanding to know why an officer has pulled you over will only end badly. Any officer in uniform can stop  any car on the road. You do have the right to take down the officer’s details if you feel that your rights have been violated. In a K78 roadblock, the police are entitled to search your vehicle and can even go to a full body search if they have reason to suspect that you are hiding something. “You can ask to see the authorisation proving that the roadblock is legitimate, but  be aware that this may escalate the situation. 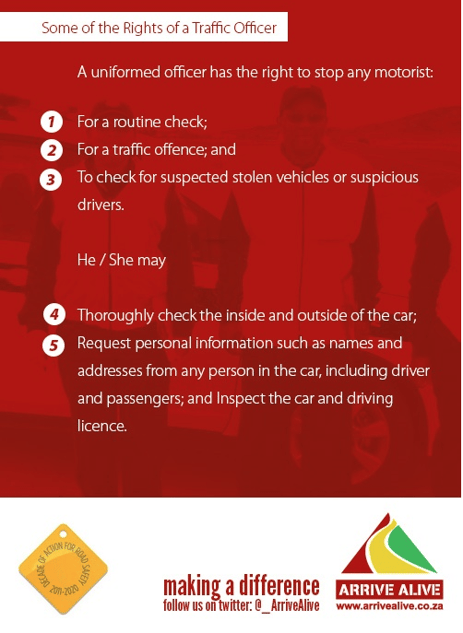 You may not refuse a breathalyzer or blood test

Driving under the influence of alcohol or drugs is illegal in South Africa. “A traffic officer, appointed as a peace officer in terms of section 334 of the Criminal Procedure Act, 1977 (GKR. 159 Government Gazette 6295 2 February 1979, as amended) has for purposes of the CPA the same powers as a police officer.  He may therefore request a doctor or registered nurse to draw blood,” according to Arrive Alive, a national road safety campaign run by the South African police and traffic officials.

The legal blood-alcohol limit is 0.05g/100ml but the legal breath-alcohol limit is 0.24mg/1000ml of  breath. During clinical trials, all participants (regardless of gender) exceeded the limit after two beers. Some people can even exceed the limit after a single drink, depending on the drink and body type. With this in mind, it is never worth it to get behind the wheel of your car after even one drink. A single drink will still affect your reaction time and driving ability. If you’re planning a night out, it’s much safer to arrange a designated sober driver, or take a taxi.

How to present your firearm at a roadblock

If you have a firearm in your vehicle, you need to ensure that you present it in a non-confrontational, peaceful manner. Here are some tips to help you handle the situation calmly:

If your car is unroadworthy, it can be impounded immediately

Always be polite and respectful. Don’t antagonise an officer by being rude, cheeky or non-compliant, and definitely don’t display any physical signs of violence (like pushing the officer). You can’t be arrested for being just plain rude, but rudeness can quickly escalate into an argument or verbal abuse. Using obscene language (swearing), offensive hand gestures and racial slurs are all considered verbal abuse, and could lead to an arrest.

If you feel intimidated, or are worried that your rights are being violated, you need to take down the officer's badge number and vehicle registration. 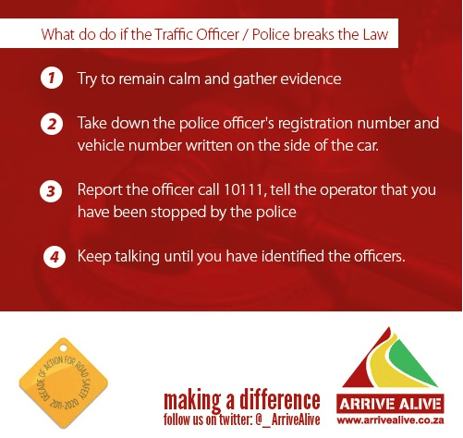 No matter what an officer says, you are within your right to film any interaction with a South African police officer as evidence, and they are not allowed to force you to delete the file. Under the SAPS Standing Order 156: an officer cannot stop you from taking a photograph or videoing them and cannot seize, damage or delete the footage.

How not to behave when you’ve been pulled over

“If you intentionally and unlawfully violate the dignity of an officer, you could be taken into custody. For example, any racial slurs, hate speech or actions that prevent the officer from doing their job could land you in hot water,” explains advocate Jackie Nagtegaal in an interview with Wheels24.  The worst thing you can do when you’ve been pulled over, is to antagonise the officers on duty.

Luckily for the driver in the video below, the police officer has a sense of humour.

When can a motorist be arrested in South Africa?

If you have outstanding traffic fines, you can be issued with a warrant of arrest - in which case, officers at a roadblock will be obligated to arrest you. However, you’re entitled to request to see a copy of the warrant of arrest, and you cannot be detained while they go and fetch one (this is an unlawful arrest) - so they need to have the warrant with them at the time of the arrest. Do not resist arrest. Peace officers (like the metro police) are allowed to forcefully effect an arrest if you do not cooperate.

Read Arrive Alive’s article, Rights and Obligations When Stopped by a Traffic Officer, for more information on what to do if you find yourself arrested at a roadblock. 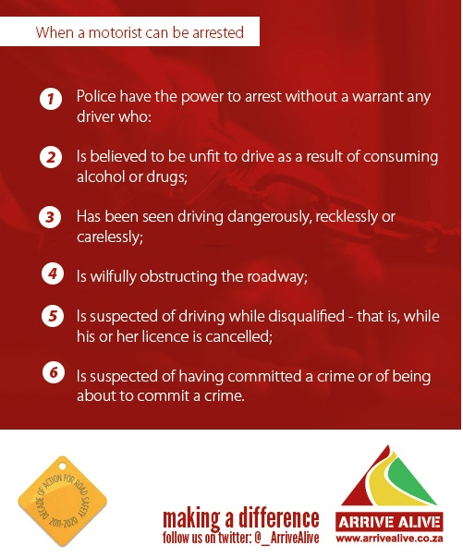 If you know your rights and responsibilities as a driver, and are polite to the officers on duty, you’ve got nothing to fear at a roadblock.

We asked some of our readers to share their most embarrassing roadblock moments.

Had a similar experience? Let us know in the comments below!

Worried you’ll forget to renew your driver’s licence or your car’s licence disk? We’ve got you covered. Sign up for Suzuki’s handy licence reminders, and never get caught unaware again.