Better in every way: the all-new Swift Sport

Better in every way: the all-new Swift Sport 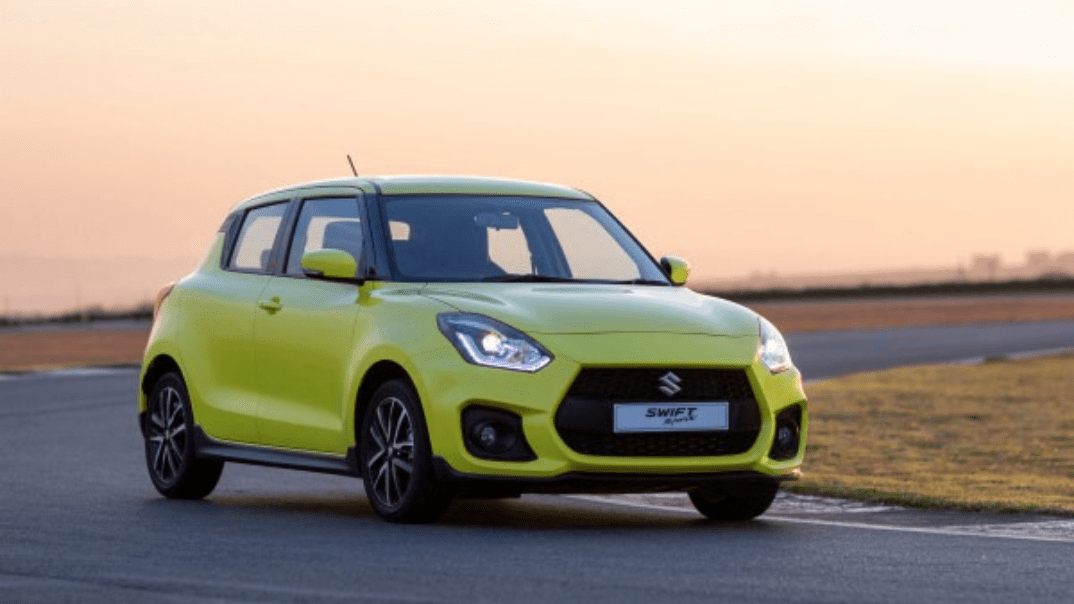 The legendary Suzuki Swift Sport, often called the barometer of the hot hatch genre, is back!

The new model takes its place at the top of the Suzuki Swift range, and while it stays true to the Swift Sport motto of light weight and seat-of-your-pants driving, it introduces forced induction and direct injection for increased, and more immediate, power.

“The Swift Sport heralds a new era for Suzuki South Africa by introducing our modern BOOSTERJET turbocharged engine technology to our range. This engine won the IATIA Engine of the Year Award in 2018 and with 230 Nm of torque, it will no-doubt be welcomed by Swift Sport and hot hatch enthusiasts alike,” says André Venter, divisional manager for sales and marketing at Suzuki Auto South Africa.

It’s all in the numbers

Chapman’s views made his motorsport teams famous and have always been the motto of the Swift Sport engineers. Since introducing the first Swift Sport in 2005, they have worked hard to reduce weight in all areas of the vehicle, from the design of the sport seats to the forging methods of the alloy wheels.

“By keeping the Swift Sport light and nimble, our engineers have made a car that is not only fast but also rewarding to drive. Where other hot hatches have become a blunt tool that rely on brute force, the Swift Sport rewards the driver with precise steering feel, nimble handling, progressive power and good mechanical feedback,” says Venter.

The 2019 Suzuki Swift Sport weighs in at 970 kg, a massive 90 kg lighter than its predecessor. With 103 kW from the BOOSTERJET engine and a sub one tonne weight, it means that the Swift Sport is part of the hallowed group of cars that can claim over 100 kilowatt/tonne.

The Suzuki Swift Sport was designed to wow its growing fan base and champions of the hot hatch genre in general. The new model is lower, wider and longer than its predecessor and stands out from its lesser siblings thanks to a range of hot hatch inspired additions.

The most prominent change to the Suzuki Swift Sport is perhaps the all-new front design. The entire nose has been redesigned and is unique to the Swift Sport. It includes a larger and reverse-slanted front grille with honeycomb pattern, straddled by two large cut-outs with integrated fog lights.

The front lights are LEDs with long light-bar type LED daytime running lights and there is a front splitter with carbon-fibre type patterning to round off the sporty look.

On the flanks, the Swift Sport is immediately distinguishable by its 16” diamond cut and polished alloy wheels, which are now shod with 195/50R16 low-profile tyres. New carbon fibre-patterned side under-spoilers flow from the front splitter between the front and rear tyres for improved aerodynamics and a lower, ground-hugging appearance.

Suzuki has also added darkened privacy glass to the rear windows for visual differentiation and to emphasise the model’s tapered roof.

At the rear, a completely redesigned rear bumper houses two chromed exhaust pipes, one on either side, that have been acoustically engineered for a deeper sound at low engine speeds. The twin-tailpipes pay direct homage to the new Swift Sport’s forebears.

All Swift Sport models also feature rear LED-taillamps and a larger, integrated roof spoiler. A rear splitter, in the same design and style as the underspoilers and front splitter, round off the stylish design.

While the darkened front, side and rear underspoilers create a clear visual distinction from the standard Suzuki Swift, it also plays an important aerodynamic role. These spoilers, combined with the redesigned roof spoiler, new flat covers under the engine and main floor and new, larger front strakes, boosts the new Swift Sport’s aerodynamic efficiency by 10% over its predecessor.

One of the main talking points of the new Suzuki Swift Sport is certainly the 1.4 litre BOOSTERJET engine.

This new engine is also available in the new Suzuki Vitara Turbo, but in this configuration, it has been uniquely tuned for more power and more lively power delivery.

Suzuki’s engineers designed the 1.4 BOOSTERJET engine with a very short intake manifold, an integrated exhaust manifold and, in the Swift Sport, a pendulum-style engine mounting system for additional rigidity. The compact design of the engine has also allowed the engineers to better position the engine for improved weight distribution and a low centre of gravity.

The Swift Sport also features a unique air intake system with dual air-intake pressure sensors and two electric fans on the front radiator, leading to 34% better cooling efficiency and 38% greater airflow to the engine, compared with the previous model.

The wastegate inside the engine is electronically controlled, and in comparison, with other iterations of the same engine this model closes quicker for rapid pressure build-up at overtaking speeds.

The BOOSTERJET engine propels the new lower and lighter Swift Sport to 100km/h from a standing start in just 8 seconds and is rated for a top speed of 205 km/h.

When it comes to handling and driveability, the Swift Sport has big shoes to fill. While no Swift Sport was ever designed to be the most powerful vehicle in its segment, it certainly offered some of the best visceral driving pleasure.

Under the guidance of Chief Engineer Masao Kobori, Suzuki set about refining and perfecting each aspect of the Swift Sport that has made it such a peach on a tight and twisty road. These include:

The Swift Sport has never been a heavy vehicle, but to shave more than 10% off its body weight in this iteration took a great deal of planning and design.

Suzuki’s engineers lightened almost all aspects of the vehicle, including its doors, body construction, alloy wheels, engine, seats and interior fittings. It did this without compromising on safety, which is evidenced in the fact that the Swift Sport is the most rigid that it has ever been.

By replacing the previous generation’s segmented frame with a continuous-frame chassis and adding more welding spots than the standard Swift, the engineers have ensured that very little body flex or shudder will enter the vehicle, even when driven very hard on uneven surfaces.

Under the skin, the Swift Sport shares the Swift’s HEARTECT platform, which is Suzuki’s proprietary platform technology that was designed for light weight, optimised handling and excellent force displacement in the event of an accident.

Interestingly, the new Swift Sport has twice as much ultra-high tensile steel as its predecessor.

In a nod to its forebears, Suzuki has again partnered with Monroe for custom designed shock absorbers that have been tuned for minimal body roll and progressive understeer in fast corners.

Other changes to the suspension, over both its predecessor and the standard Swift, include thicker anti-roll bars, an integrated single-unit solution for the wheel hub and bearings and increased spring and damper rates on the front axle.

At the rear, there are Monroe shocks and greater toe and camber rigidity, which in the latter case is three times more rigid than the outgoing Swift Sport. The Swift Sport also features a completely unique trailing arm design, for better tracking between the front and rear wheels.

The new Swift Sport will be available with the choice of an uprated six-speed manual gearbox and a brand-new six-speed automatic gearbox.

Both gearboxes have been optimised for rapid shifting under hard acceleration and both models feature the same 0 – 100 km/h acceleration times. In the case of the manual box, the shift action is 10% shorter than before, while tweaks to the clutch profile and a new synchromesh system have been added to give a more positive shift action.

The uprated manual box is well matched to the turbo powerband of the BOOSTERJET engine and allows the Swift Sport manual to accelerate 50% faster between 40 km/h and 80 km/h.

In the case of the automatic gearbox, the previous model’s continuously variable transmission – which was not available in South Africa – has been replaced with a rapid-shifting six speed automatic transmission with paddle shifting.

An interior fit for a Swift Sport

Suzuki has tasked its interior designers to make the cabin of the Swift Sport stand-out, both in comparison to other Swift models, but also when compared with the rest of the hot hatch genre.

As such, the designers have used red and chrome detailing, such as red stitching on the gear lever boot, steering wheel and seats and a special red-to-black gradation on the seat material, to convey its sporty intentions.

The Swift Sport’s sporty intentions are certainly most evident from behind the thick-rimmed D-shaped steering wheel. From here, a unique set of dials welcome the driver, with a red face on the sporty tachometer and a deep silver face on the speedometer. Suzuki’s designers have added minute scaling to the dials, to create the impression of high-end mechanical instrumentation.

Nestled between these dials is a special multi-information LCD colour display that can be programmed to show boost temperature and oil pressure, among many other pieces of information.

The driver will also be treated to stainless steel sport pedals and special semibucket seats, which have been completely redesigned to offer improved side bolstering on the seat and seatback, without the driver fatigue that often comes from heavy side-bolstering.

The side bolsters are strengthened by tubular frames, which is also used in the seatback for added rigidity, while saving weight.

“In all the design detailing, the focus was on creating the impression of a high quality, crafted interior that is focused on the driver,” says André Venter.

As one superhero has it, great power comes with great responsibility and this is certainly the case with the Suzuki Swift Sport.

The Sport model has no less than six airbags (two front, side and curtain airbags), electronic stability control (ESP) and ABS braking with electronic brakeforce distribution and emergency brake assistance (EBD). There are anchored ISOFIX mounting points for infant and child seats, side impact protection and child locks on the rear doors.

Says Venter: “The massive weight reduction, significant boost in power and the very impressive list of specifications and safety features show that we have not compromised on any aspect with the introduction of the Swift Sport.

“We recognise that this vehicle has been eagerly anticipated, and we know that the previous 1.6 litre Swift Sport left deep tracks. We do, however, think that the new Swift Sport is sharper, faster and better in every way and to all our customers on our waiting list, certainly worth the wait!”

If you can’t wait to get behind the wheel of this turbo-charged  Swift Sport, book a test drive and feel this turbo charged hot hatch for yourself.