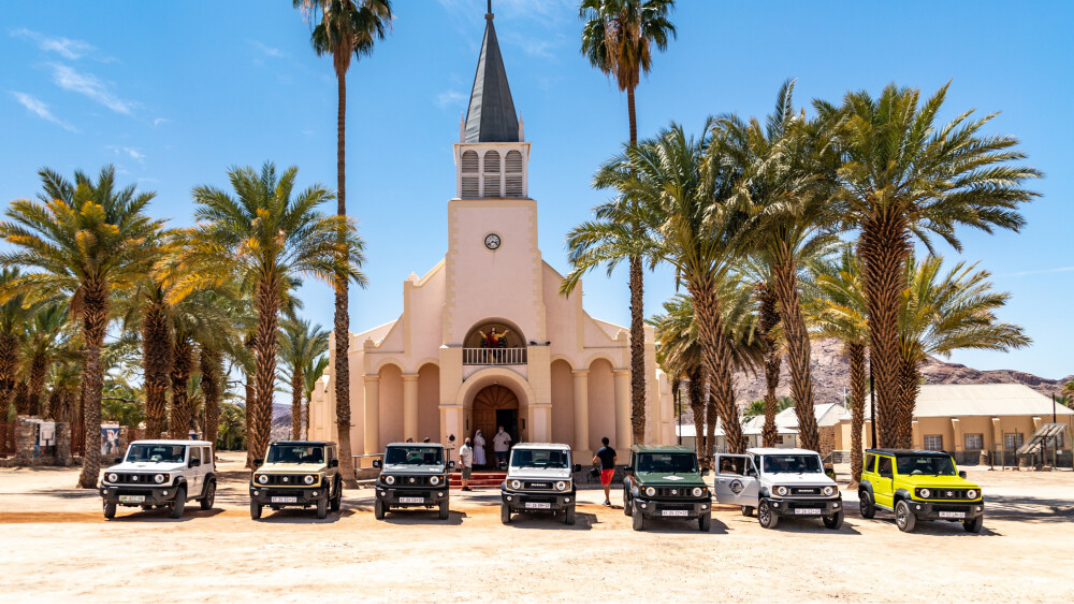 Suzuki Auto South Africa last week celebrated the delivery of its first consignment of Jimny models from its Gurgaon Plant in India. This plant recently started assembling the Jimny from 100% Japanese-sourced parts and components for delivery to markets in the Southern Hemisphere and the Caribbean.

It was announced in January that the Jimny would be added to the Gurgaon production line to help alleviate the long and ever-growing waiting lists for this model.

The Jimny has seen demand outstrip supply since its launch, helped in no small way by its proven off-road credentials, World Urban Car of the Year win and its retro-modern styling, which has won it even more fans than awards.

The heavily automated Gurgaon Plant is the third-largest manufacturing facility in Suzuki’s global network, accounting for more than 700 000 of the Japanese brand’s 2.25 million production capacity in India.

In South Africa, it is a lesser-known fact that Suzuki is the overall market leader in India, where it accounts for 51% of the total market and from where it produces and exports models such as the Suzuki Baleno / Toyota Starlet, Suzuki Vitara Brezza / Toyota Urban Cruiser, Suzuki Ertiga / Toyota Rumion, the Suzuki Swift and the Suzuki Ignis.

“When Japan announced that it will assemble the Jimny at its massive Gurgaon plant, we, our dealers and our customers sighed a collective sigh of relief.

“The Jimny has become extremely popular among both urban adventurers and overland enthusiasts, and demand has always outstripped supply. While we may not be able to satisfy demand in full every month, the new source will allow us to deliver units quicker and with greater flexibility,” says Brendon Carpenter, Brand Marketing Manager at Suzuki Auto South Africa.

To prove the point about added flexibility and volumes, Suzuki announced the addition of new models for the South African market.

A new Suzuki Jimny 1.5 GL and 1.5 GL Automatic will join the range early next year and widen the appeal of this true blue off-roader.

The new GL models share the same drivetrain as the GA and GLX models, including the ladder frame chassis and transfer case with low range 4x4 abilities, but adds a number of luxuries over the GA model.

As a reminder, the range-topping GLX offers these luxuries, and:

Following closely behind the first consignment of Indian-built Suzuki models will be a special Jimny Rhino Edition Kit.

The kit will be available on all grades of the Jimny when launched in the first quarter of 2022 and it resurrects the well-known Jimny Rhino logomark.

The Rhino logomark first appeared on the Suzuki SJ-series (the second-generation Jimny) exactly 40 years ago. It has since become synonymous with the durability, and the plucky and go-anywhere nature of the Jimny.

The Rhino was penned by a young designer, Osamu Namba, in 1981. Namba wanted to capture “the rugged strength, robust appearance, charging momentum, solidity and dynamic power” of the Jimny.

He sketched the “Jimny Rhino” in three dimensions by making the hind legs shorter than those in front and by drawing armour. It points to the left, to emphasise the contrarian spirit of the Jimny that has kept its compact dimensions and off-road drivetrain, while many other off roaders became bloated and soft.

Namba san arrived at work one morning with his sketch and it was almost immediately accepted by everyone. It has since become synonymous with the Jimny, and Namba san moved on to become a Professor in Transportation Design at the Tokyo Metropolitan University.

“We will celebrate the 40th birthday of our beloved Jimny Rhino with a special Jimny Rhino Edition Kit, which will be available on all grades from early 2022,” says Carpenter.

The Rhino Edition adds the following design elements to a Jimny:

Suzuki Auto South Africa will also partner with its global parent company and affiliates across the world to support rhino conservation in South Africa and across the continent. More on this programme will be announced once the Rhino Edition becomes available.

In closing, from Carpenter: “As one of the most globally recognised models in the Suzuki line-up, the Jimny represents the true spirit of Suzuki – authenticity, reliability, and value – in a fun, adventure-loving compact 4x4.

“The massive global demand for the Jimny has been overwhelming and we are sure that the increased production and assembly in India will enable more adventure seekers to live the Jimny way of life.

“With the Suzuki Safari overland adventure, we showcased the undisputed off-road ability of the Jimny and its application as an economical and characterful off-roader. If the smiles and cheers are anything to go by, the expansion of the Suzuki Safari to other regions and iconic South African destinations will receive great support from customers and the media alike.”

Subscribe to our blog and you won’t have to check our blog again for new posts.