Everything you need to know about the Vitara Brezza 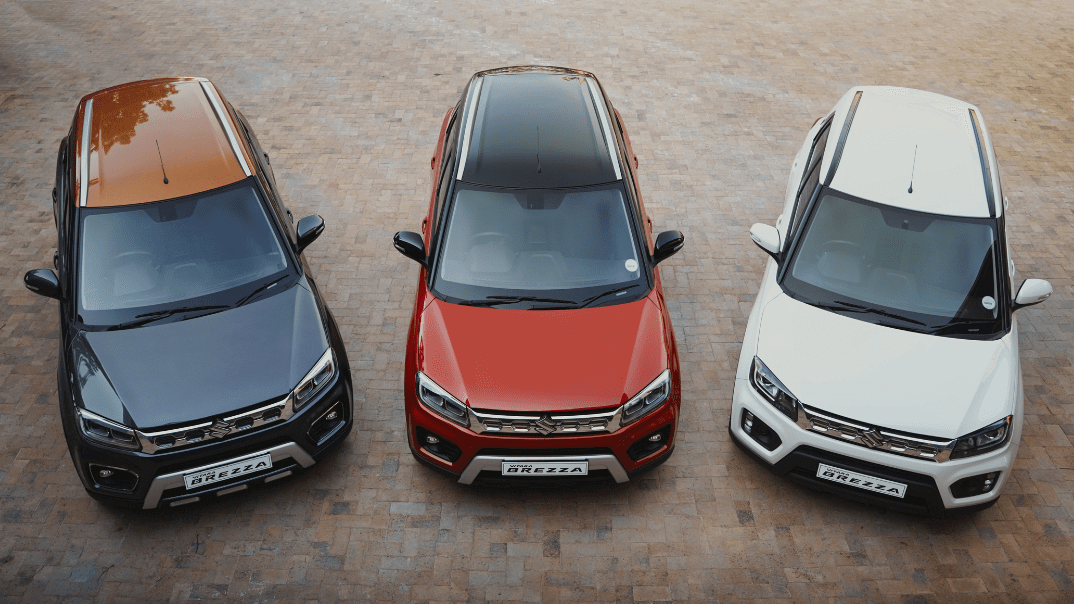 Even before it was launched in South Africa, the Suzuki Vitara Brezza was attracting comments from online auto followers who had plenty to talk about, since the car is packed with features to go along with its striking exterior design. Let’s take a walk through of the most significant features.

Front of the Vitara Brezza

Near-solid chrome grille that stretches from end-to-end between the front lights and visually underlines the vehicle’s wide stance.

The inverted U-shape of the lower grille is a signature Suzuki SUV-styling cue that is shared by the Vitara, S-Presso and Ignis.

Side of the Vitara Brezza

Hard-wearing polycarbonate side mouldings above the door sill.

All models, regardless of their colour, have a darkened A-pillar and a black insert on the C- pillar to create a visual break between the body and the roof.

Rear of the Vitara Brezza

The U-shaped rear bumper and skid plate mirror the design of the front bumper.

Overall assessment of the Brezza

Both the GL and GLX ride on 16-inch wheels, but in the case of the more luxurious GLX, the wheel width grows from 205 mm to 215 mm. The GL is fitted with steel wheels with silver wheel caps and the GLX is fitted with diamond-cut and polished alloy wheels as standard.

Inside the Vitara Brezza

The large 7-inch touch screen infotainment system is standard across the range.

The system is fitted as standard with Apple CarPlay and Android Auto and it will display the image from the reverse camera when engaged. Bluetooth, auxiliary input and a USB port are also standard, while all models allow the driver hands-free control of the system and the phone interface from the steering wheel buttons or voice command system.

In the GLX-model, the sporty steering wheel is leather-clad and has additional buttons for the cruise control system.

The speedometer and tachometer, which flank a digital information display, are highlighted with adjustable mood lighting with five customisable colours.

There are additional interior lights in the footwell, glove box and the luggage compartment.

The interior light package is part of the special GLX-trim, which includes silver highlights around the door handles, the touch screen and the steering wheel hub.

The GLX model also adds a centre armrest for the front occupants and a push-button starter that works in combination with this model’s standard keyless entry system. In addition, the top of two glove boxes is air-conditioned on the GLX specification level, allowing the occupants to cool their drinks and snacks while driving.

Safety of the Vitara Brezza

In the Vitara Brezza, active safety systems include ABS brakes with emergency brake-force distribution and brake assistance. Passive safety features include: airbags for the driver and front passenger, pre-tensioners and force limiters on all seatbelts and ISOFIX-mountings for child seats.

All models also have a high-mounted LED stop lamp, a rear window demister and a rear wiper with an integrated washer as standard.

Engine of the Vitara Brezza

The Vitara Brezza range is fitted with Suzuki’s proven and highly popular K15B engine that also serves in models such as the Jimny, Ertiga and Ciaz. This engine has multi-point fuel injection and four valves per cylinder for greater efficiency and smooth power delivery across the engine range.

In this model, the K15B-engine is engineered to deliver a solid 77 kW at 6 000 r/min and 138 Nm of torque at 4 400 r/min. Power is delivered to the front wheels via a five-speed manual or smooth shifting four-speed automatic transmission.

With the Vitara Brezza’s automatic transmission, fourth gear is considered an overdrive gear and can be disabled with a gear-mounted switch. This is particularly useful when driving on hilly and winding roads, or on steep declines and will ensure fewer changes and a smoother gear transition.

The Vitara Brezza has an electrically assisted rack and pinion steering system and is equipped with a McPherson strut front suspension and torsion beam rear suspension.

Colours the Vitara Brezza comes in

The Suzuki Vitara Brezza has a comprehensive 4-year/60 000 km service plan and a 5-year or 200 000 km promotional mechanical warranty.

Have your eye on a Suzuki? Book a test drive here.